We are preparing to mark the Platinum Jubilee of Queen Elizabeth II.

Here at the Riviera Guesthouse, which is just around the corner from the aptly-named Royal Crescent, we thought we’d have a look at our town’s regal connections!

What is the Jubilee?

The Jubilee, this time a Platinum one, is when our reigning monarch – Queen Elizabeth II – celebrates a special milestone in her sovereignty.

She had her Coronation the following year.

This year’s special date means our Queen has been on the throne for seventy incredible years.

Her seven decades as Head of State have been tumultuous. Historic events include man landing on the Moon, the invention of the internet and the Covid-19 Pandemic.

Has the Royal Family Visited Whitby?

It is surprising in some ways, as several members of the Royal Family have visited our lovely town.

In 2010, HRH the Duchess of Kent retuned to Whitby Lifeboat Station, which she opened three years before.

Then on Yorkshire Day (1st August) 2018, Whitby welcomed the Princess Royal, Princess Anne, the only daughter of our current Queen.

Does Whitby Have Other Royal Connections?

One of the longest and best-known connections is that of Whitby Jet with the Royal Family.

This stunning black gemstone can be found along the shores of the Yorkshire Coast.

It can be polished to a high gloss finish and looks stunning if paired up with sterling silver.

Queen Victoria was well known for her use of jet following the early death of her beloved husband, Prince Albert in 1861. 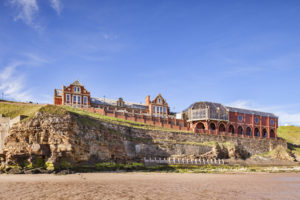 Following the death of Prince Albert, Queen Victoria remained in mourning for another 41 years, until her own demise.

The only gemstone she wore was made of jet-black Whitby Jet and she also disallowed the adornment of any other gemstone in court until her death in 1901.

Many royals wore Whitby Jet if they were in mourning after this.

What About the Name ‘Royal’ in Whitby?

Like many other towns and cities, there are various buildings and streets named ‘Royal’ in Whitby.

As already mentioned, we are just a stone’s throw away from Royal Crescent (where Bram Stoker, author of Dracula, stayed); the Royal Hotel is nearby and there is a fish and chip restaurant called Royal Fisheries.

Find out more about Bram Stoker’s visit to Whitby here.

Pannett Park is one of Whitby’s best-known attractions with stunning gardens and it includes Whitby Museum in its grounds.

The Floral Clock was originally installed in 1953 to commemorate the coronation of Queen Elizabeth II in June 1953.

The Coronation was watched by millions around the world on television, and it was the first such coronation to be broadcast via this new-fangled technology!

The ceremony lasted for three hours and took place in Westminster Abbey. 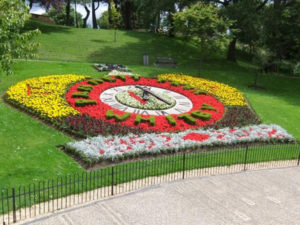 The dates are Thursday 2nd and Friday 3rd June, which tacks nicely onto a weekend. So, for those fortunate to be off work, this is a four-day weekend … yay!

The Yorkshire Coast will be celebrating, and events include …

We are sure there will be more events announced as time goes on, so we’ll this blog accordingly. You can also check out our What’s On page.

If you wanted to stay at home (or in your room here at the Riviera) then you can soak up the regal atmosphere in comfort.

Initiatives ahead of the Jubilee Weekend include the Queen’s Green Canopy, which is a unique tree planting programme to mark the Jubilee.

The winner of the Platinum Pudding competition will be announced during the celebrations.

There will be the traditional Trooping of the Colour and the Platinum Jubilee Beacons, which will feature over 1,500 beacons lit up throughout the UK and abroad.

Other events include the Derby at Epsom Downs, the Platinum Party at the Palace, the Big Jubilee Lunch, and the Platinum Jubilee Pageant.

It’s going to be hard to ignore the event and if you’re perhaps not a royal follower, then it might be an idea to plan ahead for the long weekend.

We have lots of amazing walks, beaches and forest trails to explore in the area, and you can see our top walking trail recommendations here.

Whether you want to have a break with us this year, visit Whitby for the day or live in Whitby, we all hope you have a wonderful Jubilee Celebration.

Get in touch today!