Whether you’re a Whitby regular or new to the charms of our town, there is always something you can learn about its fascinating, robust and proud history.

Whitby’s main industries have always been connected in some way to the sea.

The Whitby Sculpture Trail is a fabulous way to explore the town and learn about its amazing history.

Created by local sculptor, and of course our wonderful friend, Emma Stothard, these life-size sculptures – nine in all – are not only stunning to look at, they symbolise many amazing facts about Whitby’s seafaring connections.

Emma is such a talented artist and is a lovely friend of ours.

We’ve followed the trail (yes, it was on a cloudy day!) and here’s our experience with regards to this superb way to explore Whitby’s cobbled streets. 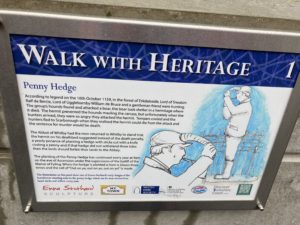 This legend is one of the strangest and not to mention, most gruesome and haunting ones that resonates down the years here in Whitby.

Back in the twelfth century, legend has it that a pack of hunter’s hounds attacked a wild boar; the boar sought shelter with a hermit. The hermit closed the door of his abode, and this annoyed the hunters. The story goes on to say the hunters then attacked the hermit. On his deathbed, the hermit said, instead of the death penalty, the hunters and all their descendants needed to make a woven hedge cut by a knife ‘of a penny price.’ The resulting hedge would need to withstand three tides. If it failed, then the lords or their descendants would forfeit their lands.

The planting of the hedge still takes place in modern times: at 9am on the eve of Ascension Day, 39 days after Easter. When it is planted, a horn is blown three times. The following words must also be called out: “Out on ye, out on ye, out on ye!”. 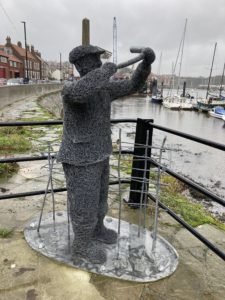 2: Bridgender, East side of the Swing Bridge

This sculpture, next to the health food store Holland and Barrett, is inspired by a photograph taken by Frank Meadow Sutcliffe (who also has the honour of a sculpture as part of this trail).

The Bridgender is a fisherman, looking at the state of the weather.

Will he ‘set sail’ or not? Before the days of modern tech and the Shipping Forecast, fishermen learned many skills including being able to ‘read’ the sky and weather conditions.

His garb is typical of a fisherman dating from the 19th Century.

We often have an idea of a fisherman being the crusty stalwart type, ready to face the elements.

Most fishermen came from families that had fished the North Sea for generations. 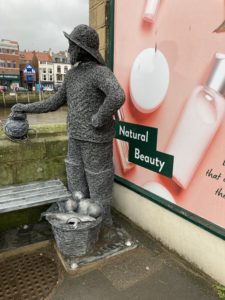 3: Fishwife, West side of the Swing Bridge

Proudly standing next to her barrel of fish, the phrase ‘fishwife’ has been used pejoratively in the past, with unpleasant and negative associations for the term within the socio-historical context.

This is a completely erroneous concept and Emma’s sculpture captures the pride and the hard labours of the fishwife.

She worked just as hard at the menfolk, preparing bait, selling the catch, while also tending to the domestic tasks too.

Baiting often included ‘the fishwife’ heading out on local beaches and rocks at low tide to gather bait (mussels), which then needed skeining, ready for adding to the fishing lines.

It could be her partner or husband is the Brigender, on the opposite side of the Swing Bridge … a tough pair if ever there was one! 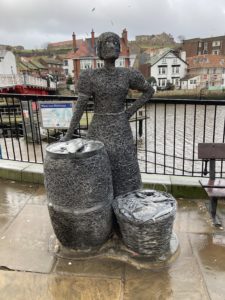 As the name suggests, the netmender had an important yet unending task of checking and repairing the fishing gear.

No gear, no fish.

Today, the fishing industry is tough, yet what was it like two hundred years ago?

Back in the 18th and 19th Centuries, the industry relied upon the skills of all who worked in it, and this definitely included the netmenders.

Without the benefits of modern technology and materials, the fishing gear was of paramount importance and the netmender had the pressure of keeping it ‘shipshape and Bristol fashion’. 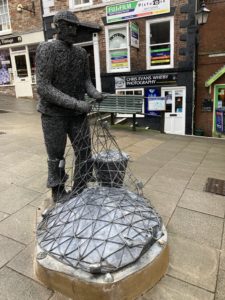 5: Gansey Knitter, opposite the Skinner Street and Flowergate junction

The heritage of the gansey – the fisherman’s jersey – is incredible.

During the Covid-19, knitting became a popular way of passing time and being creative.

For the fishermen and fisherwomen, gansey knitting was a skill that was passed down through the generations and probably helped save lives in the process.

This sculpture appears to be resting on a low wall, knitting a gansey.

Gansey knitting, though, was and still is a highly skilled craft.

The gansey features patterns which represented the locale of the fisherman (if he drowned, then the gansey could at least identify where he came from …). These patterns would be complex and passed down the generations

The heavy worsted yarn was knitted often in navy blue, with a densely knitted, patterned top half for warmth; close fitting cuffs; and the carefully selected yarn would also offer protection against the natural elements.

The gansey was a labour of love, taking many hours to complete. 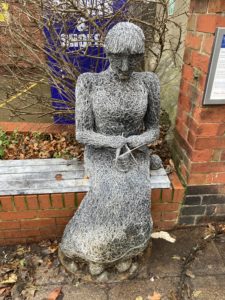 Thanks to this Victorian photographer, we have many timeless images of Whitby’s fishing community.

Born in Leeds in 1853, his studio was close to where his statue resides today.

He was, in his time, one of the most famous photographers in the world; and this is long before the ease of today’s ‘point and shoot’ digital photography!

His portraits of Whitby are stunning and must have taken immense patience.

We are talking of an era (the 1870s) when the wet collodion process and cumbersome brass and mahogany full-plate cameras were used to capture the images.

Sutcliffe later became the Curator of Whitby Gallery and Museum and he died in 1941 aged 87. 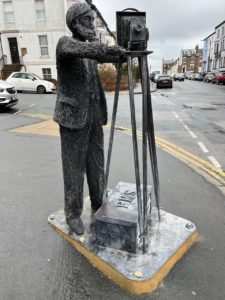 We tend to think of historic ships always having the crow’s nest (the lookout perched on a mast, high above the decks).

Yet it took a Whitby resident to invent it.

Navigator and whaler William Scoresby Senior invented it and it was first used in 1807.

Anyone on crow’s nest duty was in for a tough time: no protection from the cold, wind, rain or ice: perhaps the most famous crow’s nest was that which belonged to the Titanic …

Scoresby’s invention was created from wood and canvas, and was accessed by a trapdoor in the bottom. The interior included racks for a telescope, signal flags and a speaking trumpet (the way in which the occupant(s) communicated with the captain and his senior crew). 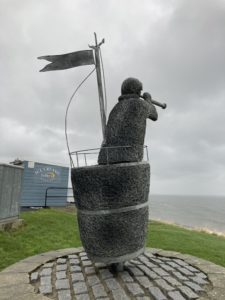 If you’re not familiar with her story, Dora was the first female fish boat skipper along the North East Coast.

She bought a boat called the Good Faith, built at William Clarkson’s local boatyard, and Dora was also a pilot for boats through the minefields during the Second World War.

During her later years, Dora became the curator of the shipping section of Whitby Museum, was President of the Ladies Lifeboat Guild and a Fellow of the Royal Society of Arts.

Dora also penned three books, including ‘They Labour Mightily’ and ‘Freeman of the Sea’, both about Whitby. 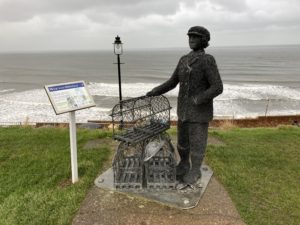 This impressive sculpture is a busy one, capturing the long, backbreaking work of the herring ‘girls’ or women, who fearlessly followed the fishing fleets in the 18th, 19th and early parts of the 20th Century.

The herring, also known as the silver darlings, travelled in vast shoals around the coastline of the British Isles, and when they made their way past the North East and Yorkshire Coast, the herring lasses would follow the fishing boats by train or even on foot.

These workers would gut and pack the fish, working in teams of three, two gutting while the third one packed them with salt into barrels ready for export.

In recent decades, the Herring Girls have been celebrated for the independent, hardworking and legendary women they were. 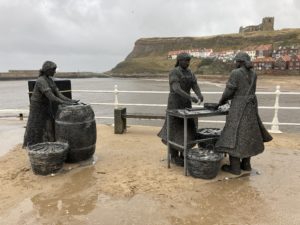 What are the sculptures made from?

Created by local sculptor Emma Stothard, each figure is made from steel wire, carefully woven by hand around a steel armature then hot-dip galvanised.

The project was created in partnership with Scarborough Borough Council.

While we’ve listed these sculptures in numerical order, you can follow the trail in any way you like.

Each sculpture captures a connection to the powerful North Sea, and in doing so, is a timeless way of celebrating these nautical connections.

As powerful as the tides and sea wind, Emma’s work is a wonderful and totally absorbing way of enjoying Whitby’s amazing views, history and characters.

Did you also know you can own your own little piece of Emma Stothard jewellery?

Emma has teamed up with Whitby jewellers, W Hamond, and launched the Silver Darling Collection.

Each piece is individually made from sterling silver, jet, amber, lapis lazuli, turquoise, amethyst and green and rose quartz.

You can also read our blog about Whitby’s Famous Connections

Inspired to visit Whitby by reading this blog? Book your stay with us!